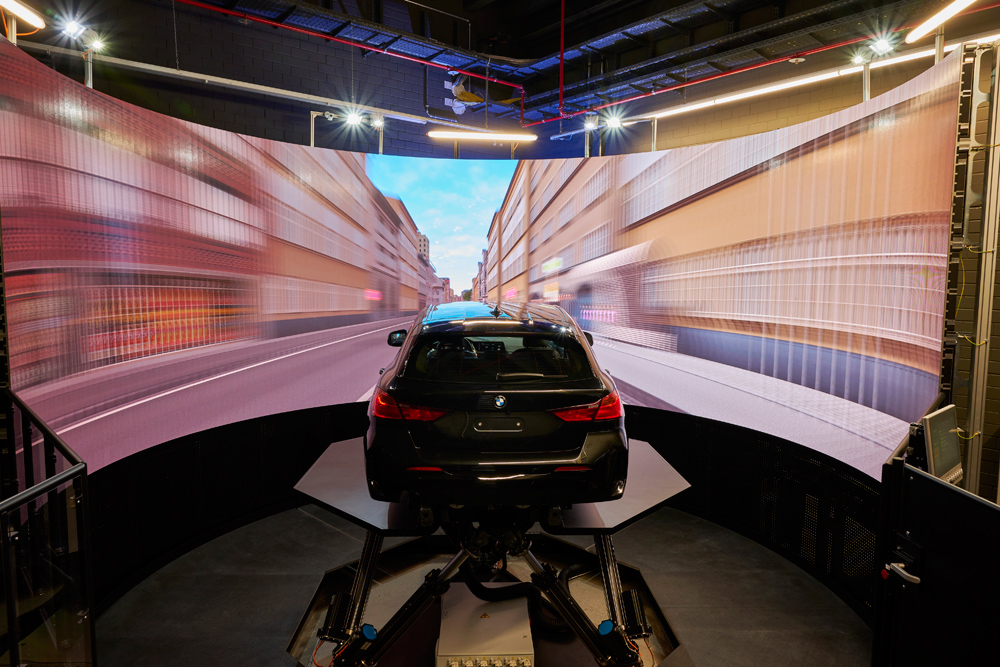 In BMW's Driving Simulator Center, a new LED wall driving simulator with a 220-degree field of view made up of 12.96 million LEDs was introduced.

DRIVER IN THE LOOP:
The Difference between Non-Collision and Trusted Automated Driving


To design reliable autonomous vehicles, engineers and researchers must be able to understand how to make drivers and passengers feel comfortable while traveling in autonomous vehicles. To do this, it is necessary to simulate in various scenarios and realistic environments and receive and reflect feedback from various types of people. We interviewed with Dennis Marcus, manager of Cruden, a driving simulator specialist. 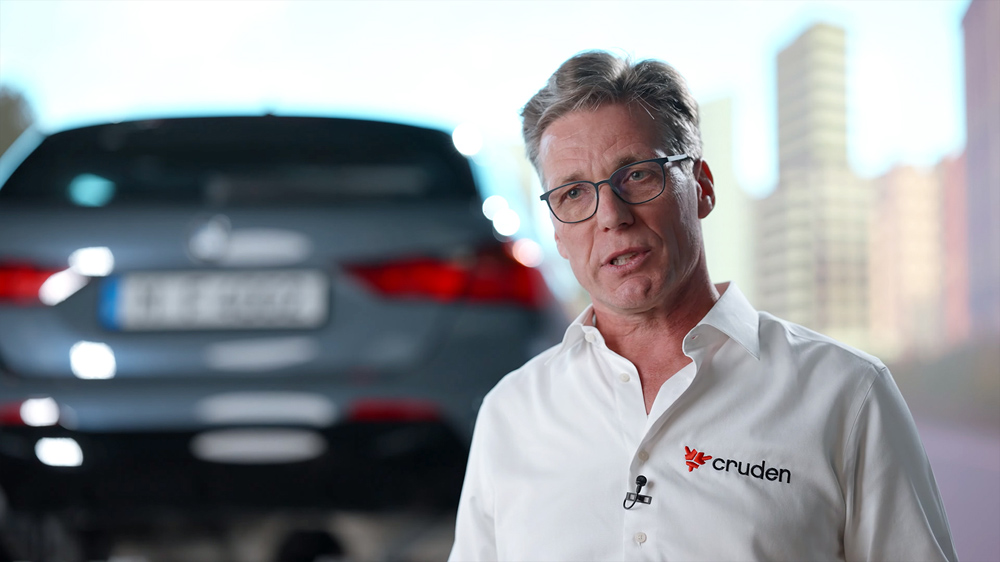 A. Role of DIL testing in AD is to make sure the AD controllers drive through traffic is a such a way the the passengers accept this and experience the ride as comfortable, because they trust the technology. For the trust element the interaction between the AD controller and the passenger is key. The passengers need to be able to see that the AD understands what is going on in the proximity of the car and will make the right calls to avoid accidents. Even if the perfect AD car that will never cause and accident, will not be accepted and bought if the owner of the car does not trust the system.

When DIL simulations was first implemented, the focus was on vehicle dynamics, ride and handling etc. Because of AD and ADAS developments the focus is shifting more to HMI and human factors experiments.

Q. Can you tell us about the importance and market of Driver in the loop through Cruden's business case?

A. The new BMW driving simulator center in Munch is a good example of the way OEM’s use DIL simulation and the value this adds. Cruden has delivered nine DIL simulators to BMW's FIZ Driving Simulator Center. In particular, 5 out of 9 are simulators with LED wall solution, and this is the first time that LED wall visual technology has been applied to a driving simulator. This new DIL simulator enables higher-level testing of various vehicle functions, including safe and repeatable ADAS, autonomous driving, HMI, HVI, and driving dynamics, in more immersive virtual environments.

Q. In autonomous driving tests, virtual simulations are emphasized to discover potential dangers such as corner cases and edge cases and enable the car to respond to such crises. I saw the logos of Cruden's customers. However, there were no new OEMs like Tesla and autonomous driving startups other than traditional OEMs, engineering consulting firms, and institutions. Are these companies overlooking the importance of driver in the loop beyond cost? What problems do you think this situation is causing?

A. Problem is that most companies working on AD technology focus on making the system work so the cars don't crash. This is important, however if the customers do not like or trust the autonomous driving, the cars will not be sold. The OEM understand this problem better than the AD start-ups. Also because it will be their problem in the end and not the problem of the companies developing AD controllers.

Q. DIL seems to be all about creating an environment where the driver can be completely immersed in the end. What factors are considered?

A. The purpose of DIL simulator is for engineers to collect feedback from potential customers on systems they are developing. For this feedback to be relevant, the driver has to drive and experience the virtual car in the same way as he would drive a real car. If this is not the case, he will behave differently and feedback will be useless and could point the enginneers in the wrong direction. The feedback provided to the driver includes: Visual(The most important), Motion(most discussed feature), haptic and Audio. From an engineering point of view, the best way to connect drivers is to connect their brains, but since this is not possible, Cruden connects visual, haptic and auditory feedback for the vehicle's acceleration, deceleration, pressure, balance for realistic virtual environment. Simulator Specialist Cruden, famous in the field of motorsport, now covers ADAS, AD testing and HIL integration, HVI, vehicle modeling, 3D contents and design processes, and more.


Q. Can you say that the beginning of autonomous driving simulation is map generation? Then Cruden's core technology and portfolio will also start with map creation, right?

A. Correct! The layout of the virtual world you are driving thought needs to be relevant from engineering perspective. We can supply a standard set of content, but we also often convert content from our customers for rendering in our simulation software.

Q. Immersion is very important. For that to happen, I think it will be important that the 3D content be very realistic. How high has this leveled off in DIL? Is that why game engines like Unity are used in the automotive industry? How have these engines affected the industry and Cruden?

A. Indeed. Render engines from the gaming industry can create very realistic visuals and this is why the are uses more and more in DIL simulation. One remark to this, when doing experiments with engineers or expert drivers the visual quality is typically less important than in experiments with "regular" people driving cars. 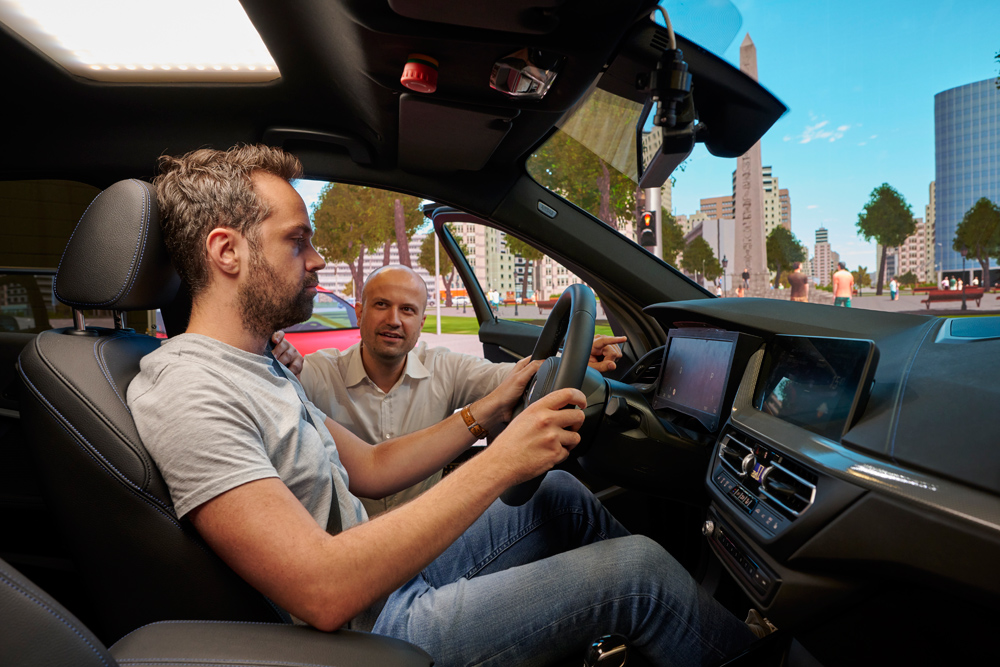 For the feedback to be correct, the driver must drive and experience the virtual car in the same way that he or she drives a “real” car. (BMW’s DIL)


Q. Isn't it just a matter of simply plugging in a rendering engine like this? What challenges did Cruden have to overcome in order to take full advantage of this rendering engine, both software and hardware?

A. Render engine challenges include high frame rates, multi-channel visual system, and eye limiting system resolution. However, the integration with engineering tools and synchronization of visuals with motion, haptic and audio feedback is the bigger challenge and more important as it can be real the immersion completely.

Q. The most recent development of Cruden I’ve seen is the LED simulator. How do carmakers like BMW benefit from LED simulators? What’s the problem with the projection method?

A. The main advantages of LED walls are contrast and brightness. Because of the higher brightness the light from the LED wall provides realistic ambient light inside the chassis mock up. Contrast is what the human eye needs to see objects. For the contrast it is important to realize that a LED wall is black, so when switching off the LEDs for a pixel, the driver will see true black. A projection screen is white, which can never result in true black.

Another operational advantage is that with an LED wall, we don’t have to deal with the fact that a chassis mock-up in the light-path of the projectors can cause a shadow on the projection screen, that the driver might see.

The LED wall driving simulator has the advantage of high brightness and contrast. Other significant benefits include low latency, high frame rate, uniformity of color and brightness, elimination of blending areas and light path blocking issues, and flexibility in adjusting screen size and shape to meet viewing requirements.

Q. What do you think you are missing right now to create the perfect simulator you envision?

A. The main limitation of any driving simulator is in the motion system as no motion system will be able to simulated the sustained accelerations and decelerations you experience when driving a real car, no matter how large you make the workspace. If your be great if we would be able to bypass the human vestibular system and feed the accelerations directly into the brain, but this is obviously not a very realistic request.

In reality the main challenge for us as a simulator builder is to create the highest levels of immersion given the available budget.

Q. Lastly, would you like to say something to Korean readers?

A. Since we have customers all over the world we have experienced working with automotive engineering teams all over the world. The Korean automotive industry is unique in its drive to bring innovations as well as quality. As a result of this the best-selling EV in Europe currently come from Korea. It is for this reason that I am convinced that the autonomous car that sells, is likely to come from Korea as we are proud to play a role in this with our DIL technology.

Our partner in Korea is MDS Tech. Please feel free to contact them to learn more about DIL simulation. 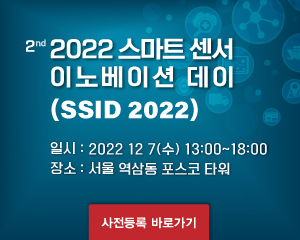